← more from
Nonclassical
Get fresh music recommendations delivered to your inbox every Friday.
We've updated our Terms of Use. You can review the changes here. 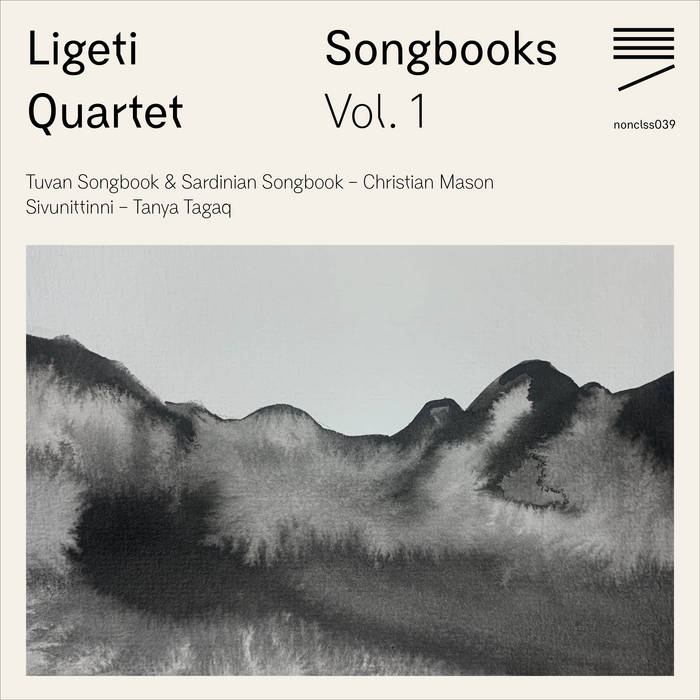 "a heartening reminder that modern music too can refresh the spirits and take us out of ourselves." – The Telegraph

"A startling, eerie display of overtones and harmonics. It's enchanting, and these players never sound like they're going through the motions; the sense of intent is constant." – The Arts Desk

"Mason's music is astonishingly inventive and powerful, generating a searing hypnotic intensity among the four-piece Sardinian Songbook... It's a potent, persuasive disc, delivered in a close, authentic recording." – The Strad

Born out of a long-standing collaboration between Ligeti Quartet and composer Christian Mason, Songbooks explores the way in which the acoustic properties of the string quartet emulate the human voice through Mason’s use of extended techniques and unique sound-worlds. The result is an album of thrillingly direct and toe-tappingly exciting music which is profoundly influenced by the traditional songs of Tuva and Sardinia.

“Seeing the Tenores sing spontaneously at 2am in the main square of Sant'Anna Arresi after we had shared a concert is forever etched in our memories. Songbooks has seen us 'grow' as a quartet, and now represents our ethos – fitting for our debut album in our 10th year together!” – Ligeti Quartet

Ligeti Quartet has established a reputation as one of the UK’s leading ensembles, breaking new ground through innovative programming, supporting emerging composers and taking new music to diverse audiences. 2020 marks 10 years since their formation, and this is their debut album on the nonclassical label.

Two further Songbooks are planned, the first based on the Inuit Katajjaq singing of Northern Canada and the second on Umngqokolo singing from the Xhosa tradition in South Africa. The Tuvan and Sardinian practices explored on this first album are both traditionally performed by men and the Inuit and Xhosa practices by women.

Tuvan Songbook
Tuvan Songbook takes the form of four movements which are inspired by four traditional Tuvan songs, each re-imagined for string quartet. Mason applies the vocal tradition of Khöömii to the instruments of the string quartet, dreaming up thrillingly unique textures and timbre combinations and opening up a huge new range of possibilities for the force. At the heart of each piece is a song, brought to life through both the remarkable versatility of the string instruments and the quartet’s voices.

Christian Mason says: ‘It is not just overtones that abound here: the Tuvan tradition often celebrates the horse, and there are galloping rhythms aplenty. And though I am no horse rider I tried to keep the horses galloping in my imagination while composing these pieces.


Sardinian Songbook
Sardinian Songbook is inspired by the ancient tradition of Sardinian male vocal quartets and the world-famous Tenores di Bitti. The group comprise a soloist (Oche) along with three harmonising parts (Bassu, Contra and Messu Oche) who stand close together to feel each other’s resonance. This astonishingly visceral harmony creates distinctly audible overtones, which sometimes give the impression of a ghostly fifth voice (Quintina) floating above the ensemble. Achieving an audible Quintina is therefore something always strived for but not always achieved, and a performance will often greatly fluctuate in pitch centre as the Tenores search for the perfect resonance with their surroundings.

It is this richness of timbral overtone possibilities that Christian sought to explore in Sardinian Songbook. In keeping with the practice of Tenores, each movement features a soloist, but rather than being a fixed individual, the role of Oche is transferred around each member of the quartet.

Mason says: ‘I fell in love with the Tenores’ uniquely intense vocal timbre, their harmony which seemed pure and rough at once, and the sense that this music was, at root, not so much about performance as simply being together in the world, in a community of spirit. Like string quartets, the tenores usually sing in groups of four voices, but being free from instruments they stand very close together enabling the resonances of their voices to blend and interact in a special way. The quartet, of course, can only sit so close before their bows clash, so I have chosen instead to reflect this physical closeness inversely, by getting the players to stand increasingly far from one another as the piece progresses. In so doing, the initial state of sonic blend gives way to hocketing lines, opening up the sense of space.’

Sardinian Songbook was commissioned with the generous support of the Britten-Pears Foundation and the City Music Foundation, receiving its premiere performance on 24 April 2018 at Firth Hall, University of Sheffield.

Completing the album is ‘Sai Ma (Racing Horses)’ an arrangement of a traditional Chinese tune, written in 1963 by the erhu player and composer Huang Haihuai (1935-1967), and ‘Sivunittinni (The Future Ones)’ by Tanya Tagaq, written in 2015 for the Kronos Quartet’s Fifty for the Future project. Tanya Tagaq has brought the practice of Katajjaq throat singing into the spotlight through her unique pop/punk sensibilities and production. Katajjjaq is traditionally practiced by two women who perform very close to each other, facing off in a kind of musical contest in which each performer must imitate what has come before them, varying each repetition slightly. The loser is either the first one to run out of breath or laugh (normally both of these things happen).

A string quartet dedicated to modern and contemporary music

Bandcamp Daily  your guide to the world of Bandcamp

Quelle Chris joins the show to discuss his most recent release, "DEATHFAME"